I am in my third open relationship and it works. Trust and communication make it work.

Is this a good thing? Well, the jury’s still out on that. Short-term, having an open relationship can be a lot of fun, and can mean a lot of sex. But long-term, there are some unique relationship hurdles that our culture doesn’t exactly prepare us for. It’s easy to model behavior on monogamous couples that you see in movies and on TV, but how many healthy happy stable poly guys do you see?

Related: I Don’t: Six Kinds Of Relationships To Try Before, Or Instead Of, Marriage

The research comes from Australia, where a third (!) of respondents said that they were in open relationships. About the same amount said they were monogamous, a quarter said they were just having casual sex, and the rest aren’t getting any ass right now.

Other intriguing findings: half used apps to meet other guys; a third meet guys in bars; and just over a quarter make new friends in saunas. Saunas! Is that an Australian thing, or is this some global gay trend that we’ve missed out on? Saunas used to be a big thing in the United States but we can’t think of the last time any of our friends mentioned going to one.

Related: Guys Reveal How They Really Feel About Open Relationships

And there’s some good news from the survey as well: a doubling in the rate of STI testing. If we’re all having more sex we’ll need to be extra-vigilant about combatting diseases. For example, after International Mr. Leather last weekend, there was a mini-outbreak of severe flu-like symptoms in Chicago. A bunch of attendees wound up hospitalized. But quick testing and quarantines kept the illness under control, and despite a little rumor-mongering about meningitis, everyone seems to be on the mend.

So in terms of physical health, it seems like we’re making some good choices about being in open relationships. But what about emotional health? That’s a much harder quality to gauge. Time will just have to tell whether this means bigger, healthier, happier families; or if the lack of poly visibility leads to heartbreaks and mistakes.

Are you in an open relationship? Tell us about it here. 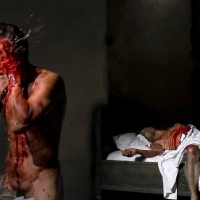