“And when they met, it was moyder…”

Deadline reports that NBC has decided to remake Hart to Hart — the ABC TV series that starred Robert Wagner and Stefanie Powers (1979-1984) as a wealthy, jet-setting couple who solved mysteries — with a gay couple at its, er, heart.

NBC describes its Hart as a “modern and sexy retelling” of the original, starring “by-the-book” attorney Jonathan Hart and “free-spirited investigator” Dan Hartman. The dynamic duo “must balance the two sides of their life: action-packed crime-solving in the midst of newly found domesticity.”

And since the couple will struggle to balance their love of crime-solving with their love of one another, we’re hoping it stars Matt Bomer opposite … well we don’t know quite who would be his equal paramour. Or maybe Dan Bucatinsky could vie for the role and have a young male ingenue as his sidekick. Please, at least one of these actors needs to be openly gay. The sexy script will demand it!

via NBC to Remake Hart to Hart With Gay Couple | Out Magazine.

Here’s the original theme from Season 2: 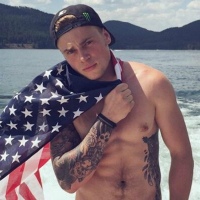