Erick Erickson is a Fox News contributor, the Editor-in-Chief of RedState.com, and was recently named the “Most Powerful Conservative” in America. That last honor is a stretch at best (anyone hear of the Koch Brothers?) but it’s a clear indicator that Erickson, God help America, is a thought leader on the right. (Considering he’s a man who can’t properly spell “Twitter,” that is a scary thought.)

On Thursday, Erickson published an editorial he wrote that claims the “divide between Islamic extremists and gay rights extremists is at death.”

He goes on to lament the news about a Washington florist who refused to arrange flowers for a same-sex couple’s wedding, citing her deeply-held religious beliefs. Erickson, falsely, states “Barronelle Stutzman is now going to lose her business, her life savings, and possibly her own home for putting her faith into practice. Both her customer and the State of Oregon are taking everything she has for not bowing at the altar of sexual sin.”

(In fact, the fines, if any, have not been determined. Even the Kleins, the Oregon bakers who lost their case, have had no fines determined, years after they refused to bake a cake for a same-sex couple’s wedding.)

Never mind the fact that ISIS repeatedly has thrown people they accused of just being gay off the rooftops of buildings, then stoned them on the ground – just in case the impact or the terror didn’t kill them. The analogy between gays and ISIS is mind-bogglingly false.

Calling gay rights activists “the Imams of America’s cultural ghetto,” Erickson notes they, for the most part, “have not turned physically violent. But they are intent on destroying any who disagree with them. They will take the homes, businesses, and life savings of any who defy them. They will use the tools of the state and mob action through boycotts, fear, and intimidation to make it happen. They will not kill but they will threaten and scare.”

via Fox News’ Erickson: ISIS And Gay Activists Are Pretty Much The Same, Except For The Killing Part – The New Civil Rights Movement. 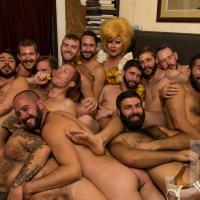